For Sale, Past Listings, Sold 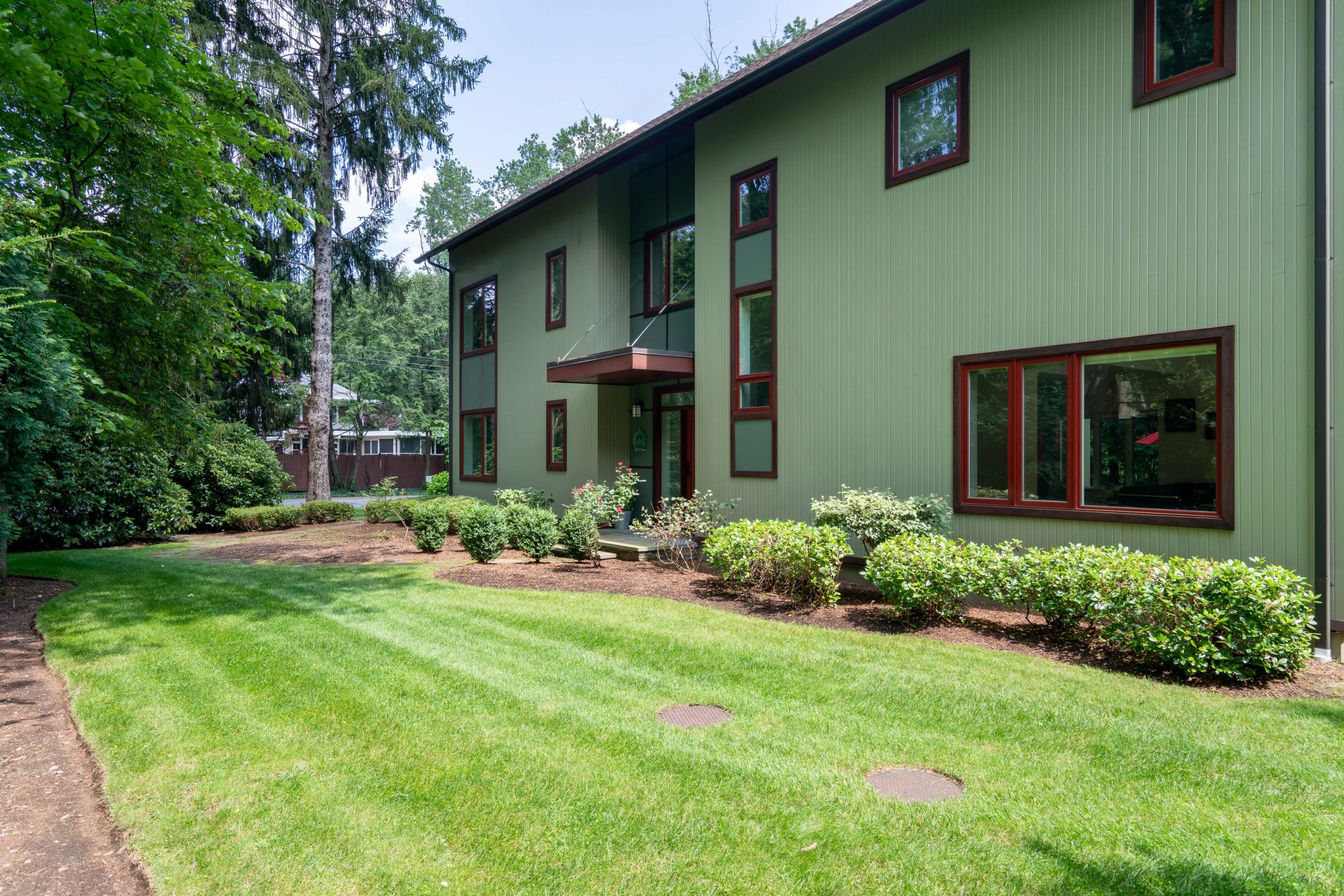 This 2010-constructed Modern home in the established and historic Five Fields Midcentury-Modern neighborhood is a rare opportunity. Architect-designed and built to exacting LEED-certified energy efficiency standards, One Stonewall is truly a singular home. A geothermal HVAC system is only the beginning of the winning features. Big windows let in the natural light and look over the bordering conservation land. The living room is centered on a gas fireplace and shares an open concept floor plan with the formal dining room. The kitchen has a separate breakfast area and opens to a patio. Soaring nine- and 11-foot ceilings offer a wonderful sense of volume to the space. There’s a first-floor bedroom suite with a generously proportioned private full bath. A primary suite has a large full bath, large corner windows, and two walk-in closets. It is set off up a few steps from the rest of the second floor, which also features two more bedrooms, a shared full bath, and an exercise or bonus room. A walk-up third floor has a big window, skylights, and the maple hardwood floors found throughout the house. There is also an ample storage portion. There’s an attached two-car garage, a natural-feeling landscape, a lawn irrigated in part by a gray water reclamation tank, and a permeable patio overlooking the wooded setting. Sited on a cul de sac close to the neighborhood swimming pool and playing fields with a recent architect-designed playground. Those who know about the cherished modernist enclave of Five Fields will want to act fast on this welcoming home.

TAC purchased the old Cutler Farm, and the young firm moved forward on their conception of a development that they would control from beginning to end. While the houses of Six Moon Hill in Lexington were mainly built as a community to house the highly collaborative The Architects Collaborative (TAC) partners and associates themselves (Bauhaus and TAC founder, Walter Gropius, built his own famous house out in the nearby town of Lincoln), the architects also conceived of their next such development of spec houses to sell to other home buyers and chose a farm on the southwestern part of town. This became the neighborhood known as Five Fields.

One of the original eight TAC partners, Dick Morehouse, a resident of Moon Hill, oversaw the project and even acted as a salesman, showing the new homes to interested buyers.

The project was conceptualized as 68 house sites, though the initial phase consisted of 20 houses built in 1951, 1952, and 1953, the sales of which would finance the rest of the project. The original price points of these homes—some of which now fetch close to $2 million– ranged from about $18,000-$35,000.

“For twenty years after the establishment of the neighborhood, TAC approval had to be obtained for additions. The restriction expired in the early 1970s. Today, almost all of the houses have been modified or added onto over the years, obscuring what was originally a neighborhood of houses built as variations on a few standard plans.” (See link to the source below).

As one of the other original partners, Chip Harkness, explained to the Boston Globe several years ago, describing the goals of the TAC when they set out to build Moon Hill, “An initial goal was low-income housing. We were shooting to build homes for under $15,000. That’s quite a bit less than the $1 million one of the houses recently went for.” Like Moon Hill, form followed function in the design of the Five Fields houses, the homes were sited sympathetically into their surroundings and the existing contours of the land, and there was common land set aside and a swimming pool, a playground with playing fields, and a skating pond, for the community. This community spirit carries on today in both Moon Hill and Five Fields.

A boy jumps into the Five Fields swimming pool from the commemorative book, Five Fields — Five Decades: A Community in Progress.