SOLD January, 2012 $622,000. One of the first Peacock-Farm style houses built outside of the Peacock Farm development, this 1958-built modernist home was designed by Walter Pierce and updated by the current owners, an architect and a designer/artist, only the second set of owners of this particular example of the coveted style, offered at $634,000.

The layout is a classic one here in Lexington. Upon entering the front door, one is taken into an informal foyer created by the brick of the rear of of the fireplace and an interior wall. The house opens up dramatically upon turning right, with ceilings that vault upward with the chimney in the living room, and downward to the end of the house, drawing one’s eye toward the large window overlooking the patio, also creating a more intimate dining space. The current owners have opened up the wall between the dining room and kitchen, creating more of a loft feel. Most (I only hesitate to write “all”) of the interior walls in Peacock Farm-style homes can be changed, as the construction is post and beam, the former jettisoning the need for load-bearing interior walls.

If one were to look to the left upon entering, instead of heading right as described above, (s)he sees the split stairway, a few steps leading up to three bedrooms and a bath, or down, to a family room with separate exterior entrance/egress, a study (potential fourth bedroom), a second full bath, and the utility room. Additional storage is in a crawl space through the utility room.

The original home has been lovingly maintained throughout both sets of owners. The current sellers added their own updates, including:

Some of the later improvements from the original owners(*) include:

The house sits on a 30,430 s.f. private lot and has a deeded swimming pool membership.

Showings to begin Friday, September 9, with public open houses Saturday and Sunday, 9/10 & 9/11. Contact Bill and John for private showings or if you have any questions.

Most people in Lexington know the area as Turning Mill, but it started out being referred to as Middle Ridge. Though it is now a large area of eight or nine streets, it started around Demar Road, with Techbuilt houses designed by Carl Koch, before growing further north and west and incorporating other modern designs, most notably, the Peacock Farm-style house plan designed by Walter Pierce, who along with Danforth Compton founded Lexington’s Peacock Farm neighborhood on the other side of town. This design was licensed out to other developers, as was the case here in Turning Mill. There have also been some Deck Houses built. The expanded part of the area is now referred to as “Upper Turning Mill.”

The “Peacock Farm” style and the history of mid-century modernist homes in and around Lexington,  from our web site, Modernmass.com. Also see our video tour.

*The cover of the Sunday edition of the New York Times for September 13, 1959 announced: Russians Fire Rocket to the Moon, Expected to Hit Target Today….

Inside the pages, a story from Lexington, Massachusetts: Colony of Contemporary Homes Will Be Repeated Near Boston.*

Pierce started his own architecture firm with Danforth Compton after studying at MIT with (amongst others) Carl Koch, a former student of Walter Gropius and a founding father of modern prefab housing in America as the founder of Techbuilt and Acorn Homes. Compton and Pierce noticed a “for sale” sign off of Route 2, Peacock Farm Road, a turn off of Watertown Street in Lexington. There was a 45-acre farm filled with wetlands, ledge, and woods. The two architects set out to become the developers of the site, with a plan they referred to as the “Program.” The concept was to build modern, aesthetically progressive homes that would be from a stock design yet looked as if they were custom built for the land.

Many of these homes have been renovated and expanded over the years, much like those on Moon Hill and Five Fields. They are very adaptable to such modifications. The simple approach demonstrated by these forward-looking architects of the mid-century was mostly that of rationality, using one or two plans and adapting them to the contours of the existing land with as little disturbance as possible to the existing conditions of the environment. Though these houses were not, as originally built, the most energy efficient by today’s standards, due to outdated heating systems, relatively little insulation, and large single-paned windows, they are easily retrofitted with updates for all of those components. They were, however, “green” from the get-go in their approach to land use, both in the conserving of the existing flora, with few having traditional lawns even today, minimizing impermeable surfaces (gravel driveways, e.g.), and reasonable lot sizes with larger amounts of common land for all to enjoy. 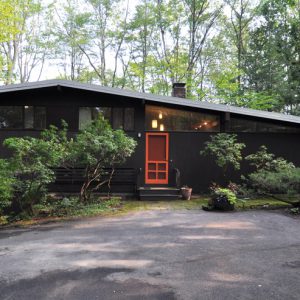