Rare opportunity to own and restore a classic mid-century modern Peacock Farm house, designed by Walter Pierce (see interview here), a design that won the 1957 AIA Better Homes and Gardens/NBC “Homes for Better Living” prize. Nestled in a wooded half-acre lot. One of the few  Peacock Farm houses with an interior garage. Bring the outdoors in with walls of glass (with storm windows) that bathe the house in natural light. Close to spectacular neighborhood pool, with deeded membership. Quick access to Route 2, Alewife, Cambridge, and Boston. Ask us for neighborhood covenants/bylaws. Lowest price in years in this highly desirable neighborhood.

Offered at $475,000. Showings begin immediately. House and inclusions being sold in as-is condition. The house needs some updating. Sellers are encouraging pre-offer inspections. All offers to be considered Monday evening, June 4. Contact Bill and John to arrange a private showing. Open house Sunday, 6/3  from 2-4.

A note on the price: 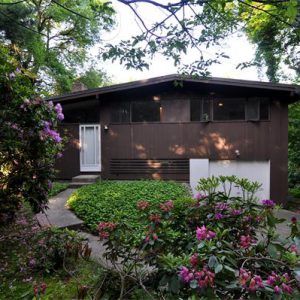