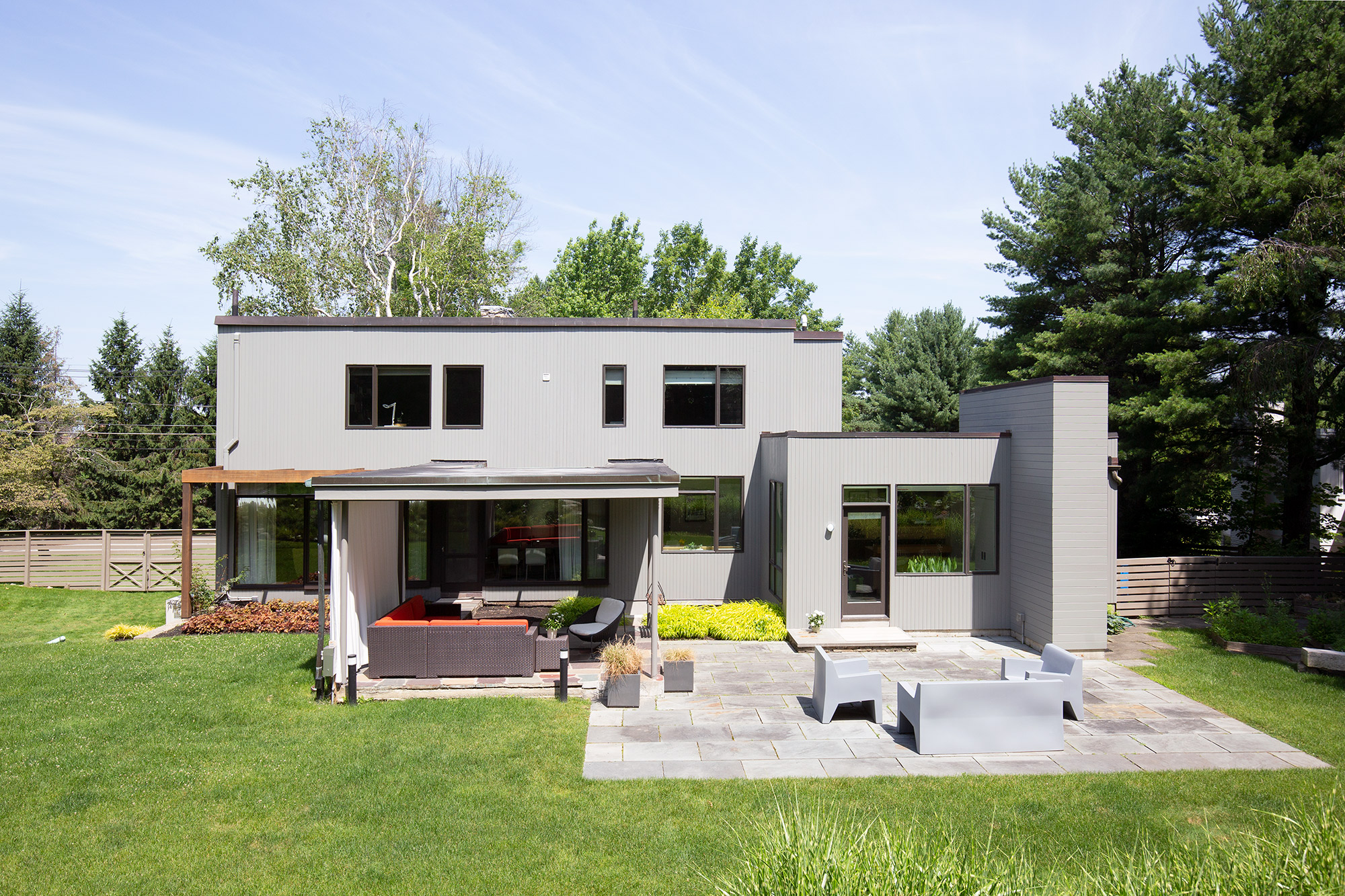 A truly special house, 20 Drumlin Road is a modernist classic in Newton. Natural stone and fine woodwork combine with walls of glass and recent updates, resulting in an updated light-filled property.

The home has had just three owners. “The Leventhal House” was bought by an interior designer from the original owners, the Leventhals, who owned Beacon Construction (later acquired by Skanska) and built the house in 1949.  The architect was Newton-based Samuel Glaser, who designed the famous Newtonville Star Market built over the Mass Pike, the John F. Kennedy Federal Building in Boston (in partnership with Walter Gropius and The Architects Collaborative) and the American Airlines hangar at Logan Airport, according to Mark Faverman at this site about another notable Glaser design, the Gibbs House in the Cottage Farm neighborhood of Brookline. Fun fact: Mr. Glaser was also the father of the actor Paul Michael Glaser, TV’s Starsky.

The Leventhal House, which is adjacent to one designed by Gropius, was renovated and expanded by Diane Burcz (see a 2014 feature about it in the Boston Globe here). The addition — designed with Charles Navratil of Architects 2  — blends seamlessly with the original thanks to the thoughtful design of Navratil, the materials chosen by Burcz, and the care taken by Cambridge’s S&H Construction. An ingenious sliding glass door in the dining area was restored by S&H and other original doors were re-used. Windows have been replaced and original concrete floors have been restored with a thin coat of new concrete or stained and polished. Radiant hot water heater in the concrete floors keep the home warm in winter and feel cool in the summer. Hot water for radiant heat is provided by a high-efficiency Viessmann boiler.

Custom cabinetry, distinct woodwork, and other original architectural pieces (Check out the banister! Check out the desk!) throughout the house have been retained and the new lower cabinets in the kitchen are walnut. Having no upper cabinets allows for an unobstructed view of the outdoors and light to enter the kitchen. There is, though, a striking and simple red birch shelf that creates a pleasing architectural line, one that is echoed on the other side of the kitchen, cantilevered from the counter. There is ample storage beneath, as seen in the detailed photos. Large sliding walnut doors open to reveal a pantry. The enviable kitchen includes a six-burner dual-fuel Viking gas range, a Subzero refrigerator, a Meile Speed Oven, and a Miele dishwasher. And more sliding doors open to reveal a cleverly organized laundry alcove. The kitchen also features three additional well-designed closets and giant mudroom that displays an enviable level of organization.

The house is anchored by a stone fireplace and chimney stack that runs from the lower level fireplace, up through the living room fireplace, and the master bedroom fireplace, creating an interior/exterior stone wall and creates a visual through-line that connects the indoors and the out.

Original light fixtures, like those in the Gropius House in Lincoln, remain, as do solid wood interior doors (which close perfectly flush) and sleek period Lucite and chrome doorknobs. There is custom cabinetry in each room. 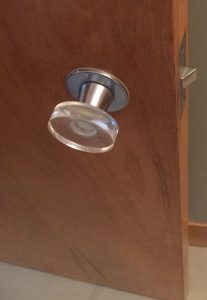 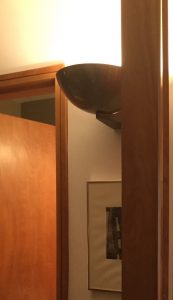 There are high-end Grohe, Duravit and Dornbracht fittings and fixtures throughout the home’s bathrooms. The powder room off of the main floor is fitted with Ann Sacks tile and a custom-designed red birch floating vanity. The master bath, updated in 2013, has heated stone floors and a walk-in shower with linear drain. Thoughtfully planned custom red birch cabinetry tie in seamlessly with the built-in hamper and original cabinetry in the bedroom and bath. A second bedroom has its own en-suite bathroom with custom cabinetry  built by Cambridge’s Half Crown Design. This bathroom and a third on the second floor have heated limestone floors.

The lower level has a guest bedroom with a full bath, and a media room with a fireplace and a bar with a sink and mini-fridge. The polished black-stained concrete floors in the media room (but not the bedroom) also have radiant heat

The roof, as with most of the updates, was new in 2010. The exterior is clad with vertical Western red cedar siding and there is a detached garage. S&H also did some site work, including landscaping and adding drainage to the backyard. A strand of birch trees were added to increase privacy. Urban Horticulture Design designed landscape and has been phasing in plantings and hardscape. The drawings are available for the new homeowner. Sump pump in utility room. Sellers have never had a wet basement.

The current owners have improved the property in the past few years with these upgrades: 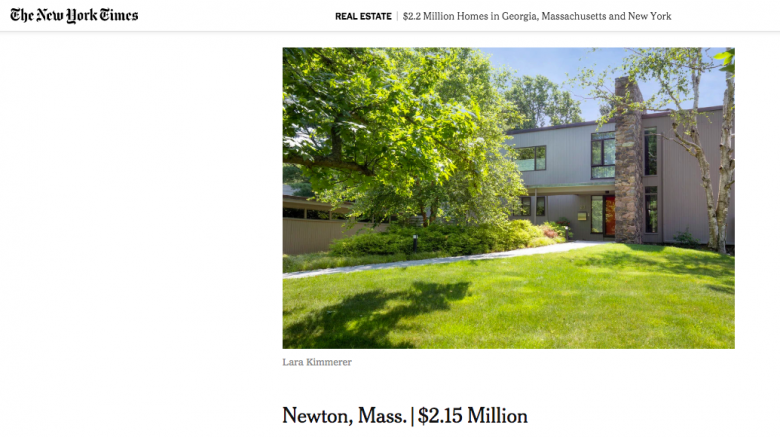 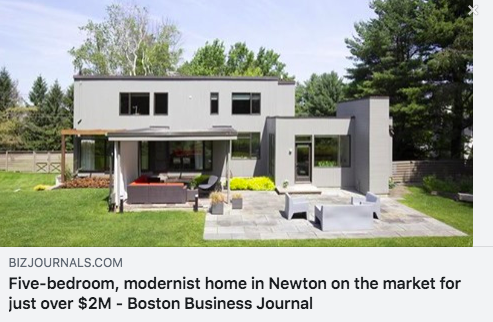 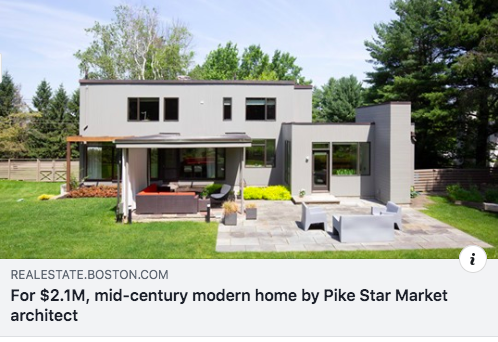 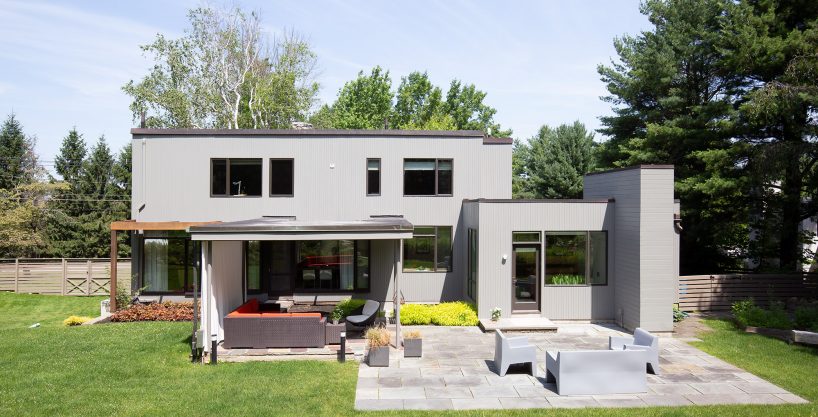