Located in the Modernist enclave of Brown’s Wood in Lincoln, 11 Moccasin Hill Road is a 1976 midcentury modern home set up on a hill on the corner of Laurel Drive, on the cul-de-sac end of Moccasin Hill Road. The house offers what so many buyers are seeking in Lincoln, an urbane sense of style and design for those looking for more than the typical cookie-cutter suburban home. Walls of glass allowing natural light to suffuse the rooms and bring the outdoors in. There are four-plus bedrooms; three full baths; a master suite; two-car garage; natural gas for cooking and heating; and most significantly, a cohesive neighborhood with historic significance in an otherwise sparsely-settled woodsy town. The property also comes with a highly coveted membership share in Valley Pond for swimming and (non-motor) boating.

Distinguishing features include huge windows that were surplus from the construction of the Hancock Tower (designed by Henry N. Cobb of the firm I. M. Pei & Partners). There is a loft that can serve as an office, homework nook, artist studio, or meditation aerie. A circa-1981 sun room with a sauna adds an indoor-outdoor spa feeling. The recent renovations — 2012 roof, insulation, and 2013-remodeled first level, and updated infrastructure (200 amp electric; French drain) provide added value.

The house was designed by Richard Reese. Walking distance to Valley Pond, the property is a short commuting distance to 128, Rt 2. and the commuter rail, but beckons you back home to get away from it all.

Brown’s Wood is a neighborhood of 23 modernist homes built in the 1950s, designed by the era’s finest local modernist architects, and nestled into wooded lots on Laurel Drive, Moccasin Hill, and Conant Road in Lincoln.

The project began in May 1953 when a group of young families, inspired by Walden II and the utopian vision of Ann and Ranny Gras, met at MIT. Further inspiration came from similar planned (intentional) modernist developments, Six Moon Hill, Peacock Farm, and Five Fields in Lexington, Snake Hill in Belmont, Conantum in Concord, and Kendal Commons in Weston, some of which were built concurrent to Brown’s Wood. In 1954 Brown’s Wood was incorporated and those who had purchased options for the 23 lots reviewed and approved each member’s individual plans for houses — no ranches, colonials, or capes allowed! The initial group included engineers, scientists, musicians, artists, editors, a photojournalist, and other professionals. Each house was eventually deeded a share in Valley Pond, a large swimming, boating, and recreational resource in the neighborhood, developed under the leadership of members of Brown’s Wood for the larger Lincoln/Weston community. Brown’s Wood differed from the aforementioned neighborhoods in that it was the only of the group not conceived by an architectural firm, developer, or builder. This was the project of a group of private individuals who did the work of planning, layout, incorporation, and zoning. This was set before Lincoln switched to two-acre zoning.

The architects who were commissioned included:

From research materials: A General Statement of the Historical Architectural or Other Qualities of Brown’s Wood That Make it Appropriate for Designation as a Neighborhood Conservation District and The Brown’s Wood Story (Ruth Wales). Click below to see Ruth’s story: 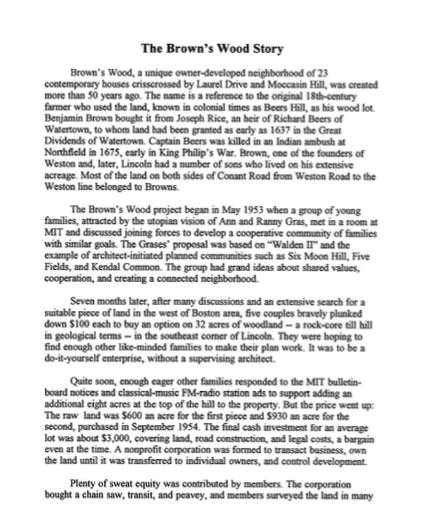 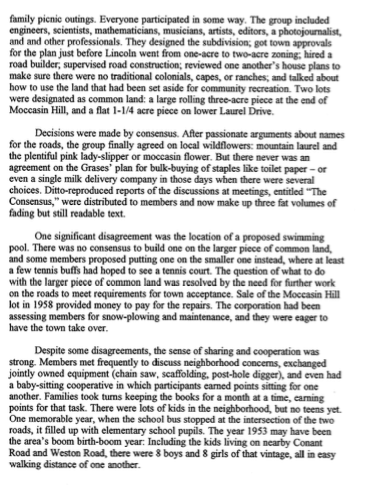 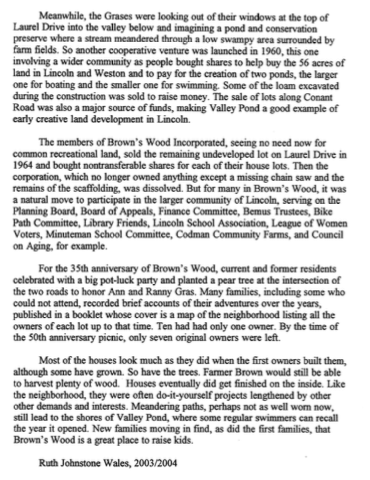