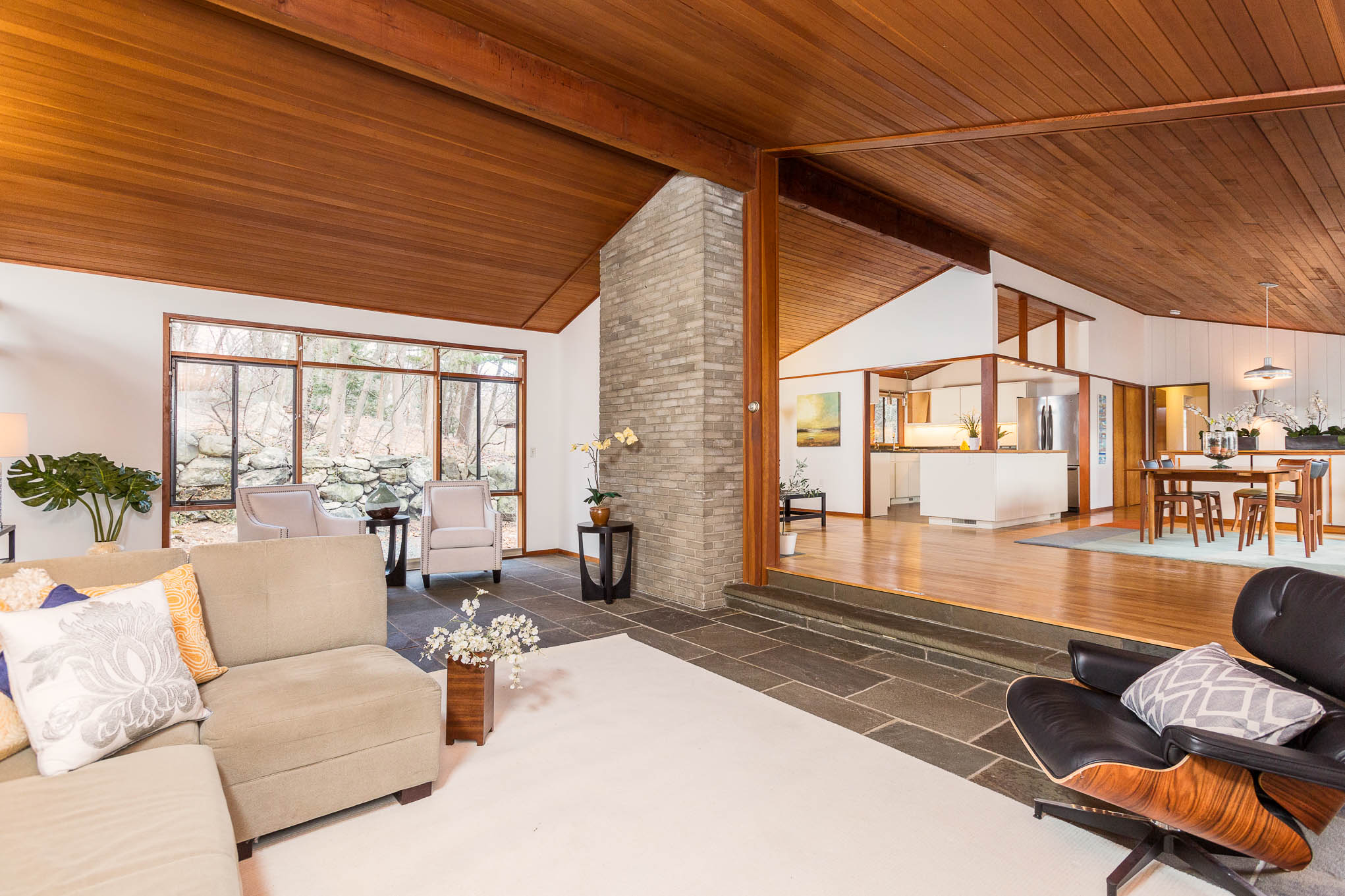 Designed by Walter Pierce and Danforth Compton as the model home in the historic Mid-Century-Modern Peacock Farm neighborhood, this four-bedroom, three-bath split-entry home is replete with the features that make Modernist homes so desirable. The living areas are flooded with natural light from floor-to-ceiling windows. The post-and-beam design allows a flowing open-concept floor plan. Vaulted ceilings lend the space a sense of volume and just the right amount of drama. The openness is balanced with a cozy living room off of the kitchen that is centered around a fireplace, and two of the bedrooms, including the master suite, are located in another wing. Two more bedrooms, a rec room, a full bath, and lots of storage are on the walk-out first level. The hardwood floors of the main level lead to a huge step-down family room with natural slate floors and walls of glass. Enjoy the indoor-outdoor symbiosis and year-round nature views.

Excerpted from the history section of our modernmass.com site:

One of three important planned modernist developments, “Peacock Farm” was just a stone’s throw across Pleasant Street from the swimming pool of Six Moon Hill, which was designed by The Architect’s Collaborative. The Peacock Farm community was founded not by an architect associated with Harvard, as TAC was, but by Walter Pierce, from Harvard’s Cambridge rival, MIT.

Inside the New York Times pages was the story “Lexington, Massachusetts: Colony of Contemporary Homes Will Be Repeated Near Boston.”

Walter Pierce started his own architecture firm with Danforth Compton after studying at MIT with (among others) Carl Koch, a former student of Walter Gropius and a founding father of modern prefab housing in America. Koch was the founder of Techbuilt and Acorn Homes (a conceptual continuation of “kit” houses like the House by Mail Craftsman homes from Sears and Roebuck in the early-1900s). Compton and Pierce noticed a “for sale” sign near Route 2, Peacock Farm Road, a turn off of Watertown Street in Lexington. There was a 45-acre farm filled with wetlands, ledge, and woods. The two architects set out to become the developers of the site, with a plan they referred to as the “Program.” The concept was to build modern, aesthetically progressive homes that would be from a stock design yet looked as if they were custom built for the land.

After initially designing one-floor houses and building a handful of them, Compton suddenly and unexpectedly passed away and Pierce went on to design what is now known as the Peacock Farm House, a modern split-level home that, as Laurie Atwater notes in her article, “allowed the home to be ‘of the hill,’ as Frank Lloyd Wright” espoused. The shape of this house style was flexible enough that it could adapt to flat or sloping lots. With some subtle variations, the typical Peacock Farm House had an entrance in the center of the broad side of the structure, a few steps up to a second floor consisting of three bedrooms and a bath or a bath and a half. There was the main floor with a kitchen, dining area and living room with a fireplace and exposed brick chimney. The structure was a basic post-and-beam system with few if any interior load-bearing walls, allowing for great flexibility in the floor plans, and many large windows unobstructed by sashes, mullions, or any unnecessary architectural features. A few steps to a lower level set in various depths of the grading of the site and sometimes a second lower level basement, depending on how much of a slope was present.

In the early post-war years open land was plentiful: the Peacock Farm land was spotted from a small “Land for Sale” sign posted on a tree on Watertown Street. It’s hard to imagine that happening today. That good fortune might be explained by the ready availability of open and relatively flat farmland elsewhere in town, which the larger developers preferred. The potential for the development of the Peacock land was, by contrast, less apparent. It was heavily wooded and there were wetlands (although not so-defined at the time). Much of the land gradient was steep, and much of the site was underlaid with ledge. To our eyes, these were assets that could be worked with. The land formed a natural bowl, shielded from the north by the hill and sloping down to the south and southeast, nice attributes in this northern latitude.

The initial idea for a Peacock Farms-type community was to provide a contemporary house of repetitive design for economy of scale that young, first-time homebuyers could afford. In the immediate post-war period the houses available on the market were primarily Capes and Colonials. Scattered examples of  custom-designed contemporary houses were being built but were mostly out of the reach of  first-time buyers. Dan and I thought there might be a market for a ready-built contemporary house.

The houses were to be part of a planned community with a common for recreational uses jointly owned by residents. A recognizable precedent for this is the New England town commons, but a more immediate source close by is a small community in Belmont, Snake Hill, started by the architect Carl Koch in the late 1930s where a group of modern houses surround a small commons. Koch had been one of our teachers at MIT.

Important to our aim of  an architecturally homogenous community was the concept of a self-governing one. Three devices were intended  to achieve this: the creation of a neighborhood Trust or Association, in which each homeowner was a beneficiary, the setting aside of several acres of common land to be owned by the beneficiaries, and an architectural review mechanism for handling future changes.

Many of these homes have been renovated and expanded over the years, much like those on Moon Hill and Five Fields. They are very adaptable to such modifications. And most homeowners in these communities have adhered to the mild covenants that the original developers put into place to keep the communities aesthetically consistent. Note that I did not write, “homogeneous.” Present day builders and developers should take note that a mish-mash neighborhood of new neo-colonial-Georgian-Victorians gussied up with various frills and flourishes is a less effective way of distinguishing a group of new houses from each other than the simple approach demonstrated by these forward-looking architects of the mid-century, using one or two plans and adapting them to the contours of the existing land with as little disturbance as possible to the existing conditions of the environment. Though these houses were not, as originally built, the most energy efficient by today’s standards, due to outdated heating systems, relatively little insulation, and large single-paned windows, they are easily retrofitted with updates for all of those components. They were, however, “green” from the get-go in their approach to land use, both in the conserving of the existing flora, with few having traditional lawns even today, minimizing impermeable surfaces (gravel driveways, e.g.), and reasonable lot sizes with larger amounts of common land for all to enjoy.

Which brings us to the socio-political philosophy that underlies these communities’ origins. Not only were these houses extraordinarily “new” in their styles, standing in stark contrast to the traditional New England vernacular via a contemporary European artistic aesthetic, but the founders of these developments also brought an egalitarian approach with attention to developing a community ideal that contrasted the largely politically and socially conservative post-war suburbs. One of the first large suburban development, Levittown, New York, was about conforming to the new neat and largely homogeneous suburban idea of the American Dream, trimmed lawns hemmed in by squared fences. These Lexington modernist developments tended to encourage responsibility and cooperation in the neighborhood as a whole, with partnerships in the non-profit corporations formed to watch over the common areas and the upholding of the covenants.

Peacock Farm is included on the National Register of Historic Places.

According to Edson H. Beall, Historian with the National Register of Historic Places, there are Federal tax incentives for certified rehabilitation income producing properties listed in the National Register of Historic Places. Go to http://www.nps.gov/tps/tax-incentives.htm for more information. There may also be state or local tax incentives both income and non-income properties.  Here is the link to Massachusetts Historical Commission: http://www.sec.state.ma.us/mhc/mhcidx.htm.

There are no restrictions at the Federal Level unless Federal funds or licences are needed.  From the NRHP web site:
• National Register listing places no obligations on private property owners. There are no restrictions on the use, treatment, transfer, or disposition of private property.• National Register listing does not lead to public acquisition or require public access. 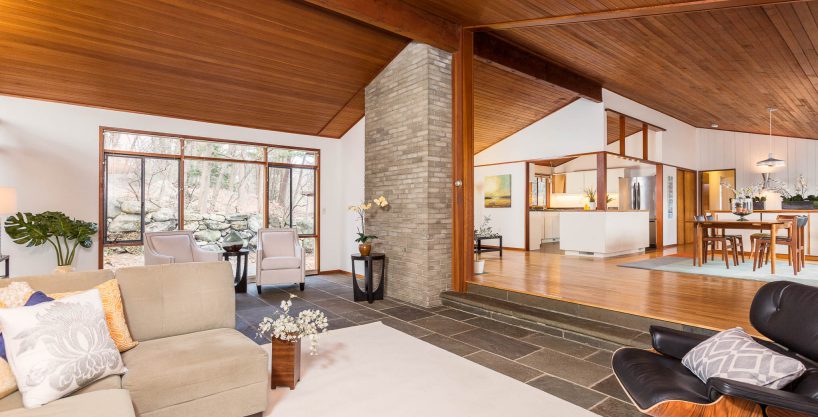