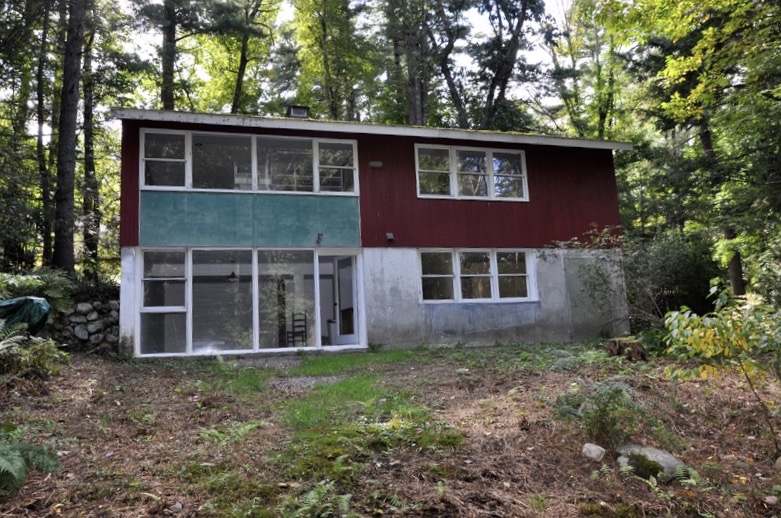 Remarkable opportunity in the highly desirable Conantum neighborhood, with a direct trail to the in-view neighborhood tennis court. Located on a gentle slope, this Carl Koch-designed modest house is a fixer-upper awaiting your vision. Or perhaps a buyer wishes to start anew to build a dream house in this private location, set back off the road atop a gentle knoll. Easy access to Conantum’s wonderful playing field, boat launch, community garden, and more. Just in time for autumn leaves to change, enjoy classic New England vistas from the large windows of this great pioneering midcentury neighborhood with a rich history, set on close to 200 acres of forest and riverfront. Welcomed home at the end of a workday, you’ll feel the the sense of Zen peace of a planned neighborhood that values simplicity and nature, like one of Concord’s most famous sons, Thoreau, who trod these woods, hills, and riverbanks. 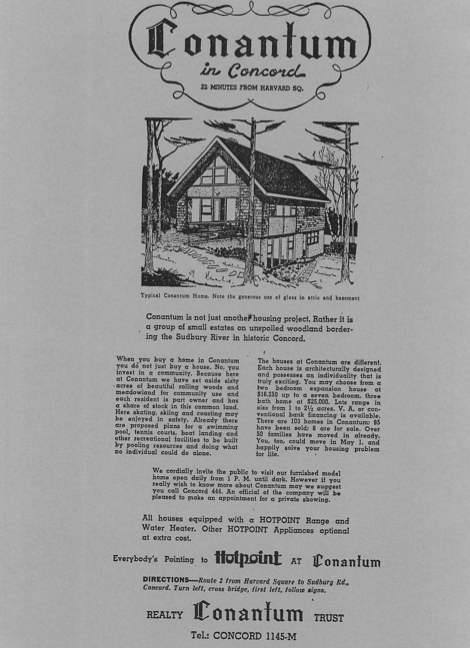 In the early 1950s, along 190 acres along the Sudbury River, not far from where Concord, Sudbury, and Lincoln meet, a Modernist neighborhood conceptualized by MIT Economics Professor, W. Rupert Maclaurin, and designed by Techbuilt and Snake Hill architect, Carl Koch, was developed. Renee Garrelick compiled an oral history of the neighborhood in 1986 (archived by the Concord Library). She writes: “Maclaurin was the sponsor, underwriting the initial expense. Architect Carl Koch was the planner and contractor Joseph Kelly the builder. Together they formed the non-profit corporation of New Towns Inc., which subsequently became known as Conantum Realty Trust in April 1951. Concord architect Frederick “Lanny” Day, who worked for Koch, was a trustee and the project’s treasurer.”

“The idea being that between the builder and the architect and the economist, you had the basic ingredients for starting a new town,” noted Koch in a 1992 interview with Garrelick.

The oral history begins with a bit of background from Koch (pronounced “coke”):

Sixty acres were set aside as common land for playgrounds, ball fields, boat landings and tennis courts. Prices of the homes generally ranged from $10,000 to $18,000 and for each buyer, the cost of land, roads, water and a share in the common land averaged $2,900. Building lots were from one to several acres.

Homes were designed on a standard rather than custom basis to keep costs low and some of the materials were pre-cut on site. There were two basic frame sizes but the range of options and variations resulted in buyers choosing from 40 different models. Construction of roads and the water system began in mid-May and house construction in July.

Read more about the history here.

And here are all tagged posts for Conantum.