Private Sale of the Fletcher House in Six Moon Hill

After, during, and before renovation shots. Click any photo to enlarge. Please note that the construction and “before” shots are larger and take longer to load:

A true labor of love! Under the guidance of architect Tim Techler, the current (second) owners of 36 Moon Hill Road, in the historic and pioneering Modernist neighborhood called Six Moon Hill (more history and video tour here), have renovated TAC architect Norman Fletcher‘s 1948 house to full glory. The renovations have stayed true to the original vision, while updating the dwelling to today’s state-of-the-art condition and level of comfort.

This house was recently sold privately by us, Bill Janovitz and John Tse of William Raveis/Modernmass.com. The asking price was $1,350,000.

As you click through the above slides, taking us back in time from it’s current state to the “before” and “during” stages of the renovation, the care, craftsmanship, appreciation, and love that was invested becomes a obvious. As Tim Techler writes:

The radiant floors had failed. The previous owners had covered the floors in cork and carpet to stay warm. Various types of radiators had been installed over time. The living room windows had been replaced with stock sliding doors and casements. You can see how “chunky” the posts and framing between the windows had become in the process. The dining room had large commercial ducts for supplemental heat and AC. The kitchen had been installed in the early 60’s. It was enclosed, rather dark except for the original skylights, and visually cut off from the rear yard. The “bridge” was glass on one side and a storage unit on the other.

Despite being worn and clearly difficult to maintain, the house had a considerable amount of charm. The main spaces clearly take advantage of multiple views of the large lot, and the layout affords a variety of private areas for family living. The ceiling heights vary throughout. Also several rooms have places to step outside into small garden areas.

It was very exciting to research the project. I have attached two of Norman Fletcher’s elevation sketches for his 1971 studio addition that I found at the MIT Museum. Also see Mr. Fletcher’s 1947 shade study used to calculate the living room overhangs for the summer solstice.

The house currently has three bedrooms, two full baths, including the en suite master, which is reached by passing through the “bridge” hallway. Steps lead up to a tower-like studio, or down to another, separate walk-out lower level (not pictured). There is roughly 3400 square feet of living area.

Norman and Jean Fletcher were both partners in The Architect’s Collaborative (TAC) with Walter Gropius, Ben Thompson, John and Sally Harkness, and others. Mrs. Fletcher passed away in 1965 and Mr. Fletcher remarried. A blended family had six children living in this house at one point.

The original house has the split-level design, with the bedrooms leading off of the main-living nucleus. In the 1970s, a bridge was added to a new addition, with the master suite, studio, and new lower level.

We work as exclusive buyer agents for clients interested in all sorts of homes and every once in a while, a seller prefers a private sale due to a number of possible circumstances. If you are interested, we are accepting exclusive buyer clients for the spring season and would be happy to offer a no-obligation consultation. Contact us here. Find architect Tim Techler here. 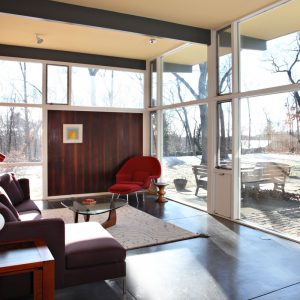 Private Sale of the Fletcher House in Six Moon Hill