53 Peacock Farm Road. Offered at $760,000.  Use the Contact button to schedule a private showing.

Pictured in the 2013 New York Times last month, this is only the second Peacock Farm listing to be put on the market since our listing of a fixer in August, 2012. With inventory  so rare in Lexington in general, in the $700s specifically (our last listing had 10 offers), and in Peacock Farm hyperlocally, we do not expect this one to last long on the market.

The current owners have lovingly renovated the 1958-built house, opening up the kitchen into the living area for a lot-like feel. The house has two rare features: an interior garage under the living area, and a heated sun room, the latter of which transitions the original indoor-outdoor feel of the design, opening to a new patio with a high-end built-in pizza oven. Also rare in the Peacock Farm neighborhood is the larger-than-usual, flat backyard.

There is easy access to Sutherland Woods conservation area, and the Peacock Farm neighborhood swimming pool, membership for which is bonded as part of ownership in the Peacock Farm Association. Peacock Farm has been accepted into the National Register of Historic Places.

Inclusions – All of the window treatments and lighting fixtures.  All kitchen appliances are also included. 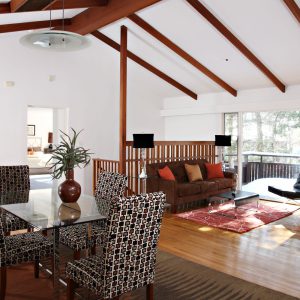