Residents love the area due to its proximity to the highly desirable 2015-built Estabrook School (adjacent — many kids walk or bike) and because it offers membership in the country-club-like Paint Rock swimming pool, which was improved and updated in 2012. It also borders the vast Paint Mine conservation area, with beautiful walking trails. The Lexpress bus runs through. And a quick zip takes you down backroads to Whole Foods, Super Stop & Shop, Marshall’s, and so on in Bedford, or back the other way into the center of Lexington. And it is not far from Route 128.

Below is the swimming pool from summer 2012: 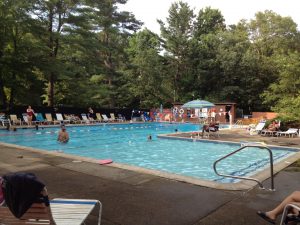 The land for the Turning Mill neighborhood was purchased by the Techbuilt Corporation. There were three model homes.  The first one built was 4 Turning Mill. Most people in Lexington know the area as Turning Mill, but it started out being referred to as Middle Ridge. Though it is now a large area of eight or nine streets, it started around Turning Mill Road and Demar Road, with Techbuilt houses designed by Carl Koch, before growing further north and west and incorporating other modern designs, most notably, the Peacock Farm-style house plan designed by Walter Pierce, who along with Danforth Compton founded Lexington’s Peacock Farm neighborhood on the other side of town. This design was licensed out to other developers, as was the case here in Turning Mill. There have also been some Deck Houses and custom homes built. The expanded part of the area is now referred to as “Upper Turning Mill.” There are now Facebook and neighborhood web pages for Turning Mill.

From the history section of our web site Modernmass.com:

Green and White went on to develop other neighborhoods in Lexington, including Shaker Glen/Glen Estates, Rumford Road, The Grove, and Upper Turning Mill.

More about Walter Pierce — and our interview with him — tagged here. See everything about Peacock Farm homes and neighborhoods here.

We are a top-ranked real estate marketing and buyer agent team in Lexington, MA with Compass. We market and sell all types of homes in Boston's surrounding towns and are the only Boston-area Realtors with a specialization in the area's rich tradition of Modernism. Email us at the "Contact" tab at the top of the page, or janovitz.tse@compass.com, or call Bill at 781-856-0992 or John at 617-851-3532 with any real estate questions. Read more about us at the "About Us" tab. Also, check our Facebook page for updates.