Love for the Ranch 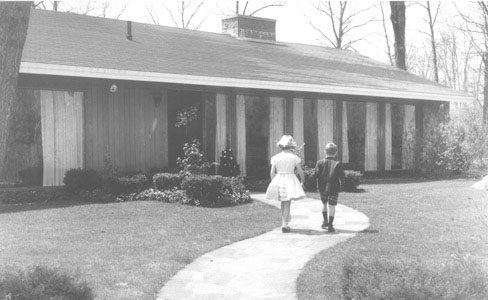 On my “to-post” list for a while has been the subject of the mid-century ranch style in the Boston area. Someone came through an open house of ours recently and said they lived in a Campanelli ranch in Needham. It reminded me to get going on a ranch post.

When my wife and I started looking for a new house around 1993, we had a list of house styles we did not want to see. Garrison Colonial was one. Ranch was another. Now, while my views about the Garrison have not moderated much (I grew up in two Garrisons), I long ago came around to a renewed appreciation of the ranch.

I suppose some of it has to do with defining the term. We all know a ranch when we see it, yet this May 2012 Boston Globe article about just the sort of renewed appreciation for ranches mentions the Peacock Farm House as a ranch. As regular readers of this blog know, we deal a lot with the Peacock Farm neighborhood and house plan. It is what some would call a split-level or multi-level. It is a Modernist house by design, with architectural pedigree. It is not a ranch. Not that there’s anything wrong with that. I loved this Atomic Ranch that sold a few years back in Lexington, listed by a colleague of mine, Gilda Lutz.

My requisites for definition of a ranch style include a single-level layout and a gable roof. I believe that’s about it. While many in New England mimicked the Colonial architectural vernacular, with faux shutters, clapboard siding, and so on, others were more progressively designed, such as come of the famous Campanelli Brothers ranches. Campanelli formed in Brockton, Massachusetts in the 1950s, and were responsible for tens of thousands of ranches in the Eastern Massachusetts and beyond. They were generally built on slabs, and, as the Globe article points out, had inspired model names like, “The Enchantress,” The Charmer,” and “The El Dorado.”

At the time of this writing, in our general coverage area, there are close to 100 ranches listed for sale, ranging from $7,900,000 for a Royal Barry Wills-designed home on three-plus acres in Brookline, to a $899,000 Royal Barry Wills in Lexington, down to more mid-century modern ranch in Waltham for $325,000.

We should, of course, be happy to act as buyer agents for any listings that are not our own. Use the contact button above.

Here is a Facebook page for a makeover of a Capanelli.

Atomic Ranch magazine is devoted to 1950s mid-century modern ranches around the country.

Here is a great overview of New England post-war housing in general, by Betsy Friedberg, at the Historic New England site. 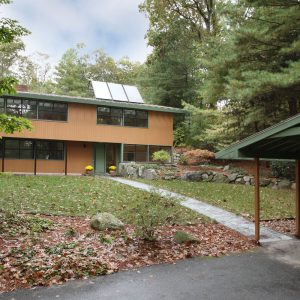