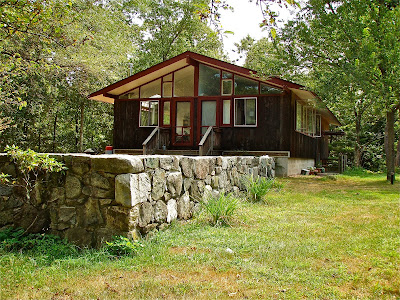 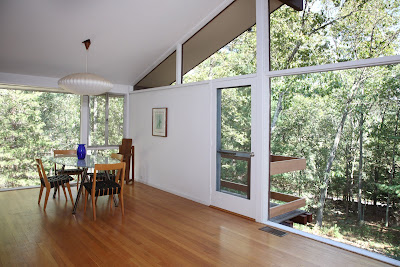 We are proud to be representing the owners of this modernist home, The Baggs House in Lincoln, MA.

A rare offering of a Hugh Stubbins-designed three-bedroom private residence, a mid-century modernist classic thoughtfully sited on a private two-acre lot in a neighborhood of multi-million-dollar estates. Open-concept main floor offers abundant natural light and great flexible flow. Two bedrooms and a studio/office on the main level; newer master suite with fireplace; a recently updated kitchen. Very fun studio/playhouse tower greets visitors. Have you longed to be the artist in a garret?

The Baggs House was commissioned in 1952 by Arthur Baggs, an engineer for Polaroid and his wife. The young architect, Hugh Stubbins, had done some work for the company and that is apparently where he met Baggs.

Mrs. Baggs was an artist. The space currently used as a family room was her studio, and the north-facing skylight, windows and perforated overhang were designed to provide plenty of indirect light for the space. She also did not like direct lighting of interior spaces; visitors will notice that almost all the lighting in house is in coves and soffits, and reflects off the ceilings. 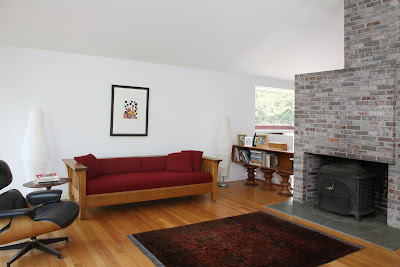 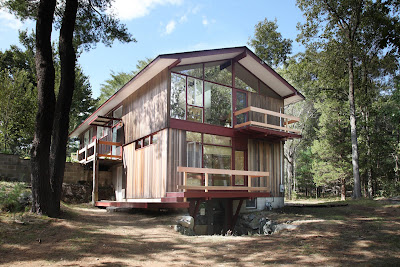 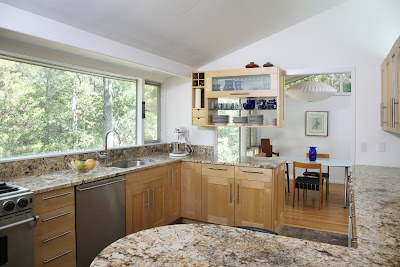 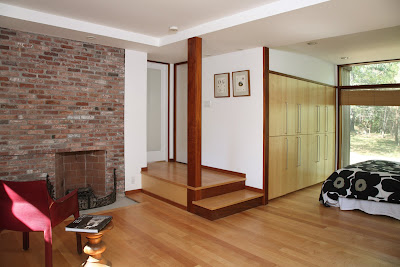 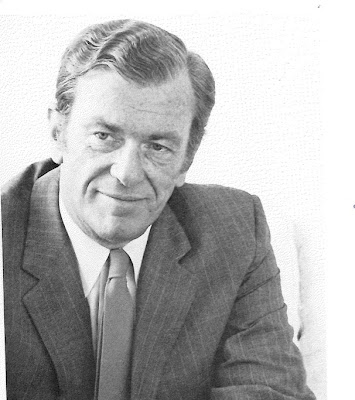 Despite regular predictions of its imminent demise — or survival only as an anachronism — the private house has remained at the core of the American Dream of the good life. Shelter magazines sell more copies than ever and there is probably no building type closer to the architect’s heart…

…Houses have frequently been thought of as the architects’ design research laboratory, but this approach should be adopted only with caution, lest the clients’ needs and desires get lost in search for a new form…

…When I started into practice, I was fortunate. The American house was going through a kind of evolution. Glass walls, open planning, and exposed structural materials all reflected new construction techniques and an increasingly informal lifestyle that has remained with us. Some of my early houses thus still seem, I think, quite contemporary today.

Hugh Stubbins was a 23 year-old young man from Birmingham, Alabama, newly graduated from Harvard’s School of Design, when he was hired by Royal Barry Wills to help provide a modern counterpart to Wills’ seminal Cape Cod-style plans. Though the small house plan was hugely popular, Wills’ felt pressured by young architects influenced by a more International Style of modernism, specifically, Richard Neutra’s 1935 competition winner. The resulting structures took the same philosophy that Wills implemented in his affordable and small, but well-designed, Cape Cods and applied them to more forward-leaning, lighter-weight structures with open-floor plans and cleaner lines. Perhaps the most important architectural element that was continued from the traditional New England structures was the post-and-beam construction of barns, This allows ultimate flexibility in interior wall placement and, subsequently, adaptable and expandable floor plans. Unrestrained from the constrictions of outer load-bearing walls, Stubbins was free to use walls of glass and other modern design techniques. The economy of the modest Royal Barry Wills Cape would now be translated into homes more in tune with their surroundings, with outer garden walls continuing into interior living areas, and the idea of the chimney extending out through the roof, so literally central to the Royal Barry Wills Cape, was taken even further, with fireplaces themselves as part of a wall that could extend beyond the exterior walls. 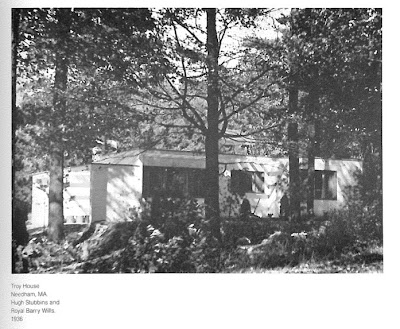 Stubbins’ tenure with Wills was brief (three years) but fruitful. He eventually went on to form a short-lived partnership with Marc Peter. Walter Gropius invited him to take a faculty position at Harvard in 1940. He formed friendships with the Bauhaus master, as well as highly notable pioneers like Alvar Aalto and Marcel Breuer. After Gropius’ resignation, Stubbins became Chairman of the Department of Architecture at the Harvard School of Design. In 1946, Stubbins built his own modernist house in Lexington, and the town soon became a hotbed for Bauhaus-inspired modernist developments Six Moon Hill and Five Fields — neighborhoods developed by The Architects Collaborative — and Peacock Farm, started by young MIT architects, Walter Pierce and Dan Compton. Stubbins started his own firm from a small office in his own house, which saw the likes of some of his former students, then employees, like I.M Pei,and Robert Geddes. Other notable students of his include Philip Johnson, Sarah and Chip Harkness (also Lexingtonians, on Moon Hill), and Paul Rudolph. The firm grew from mostly private residential commissions in the outer-metro suburban rings of Boston and other metropolitan areas, into institutional buildings for the booming world of academia, and eventually designing monumental skyscrapers and urban landmarks like the Citicorp Center in New York City, the Federal Reserve Bank in Boston, and Congress Hall in Berlin. This University of Massachusetts alum is proud to have once lived in a dormitory there in the Southwest residential area designed by Hugh Stubbins and Associates. 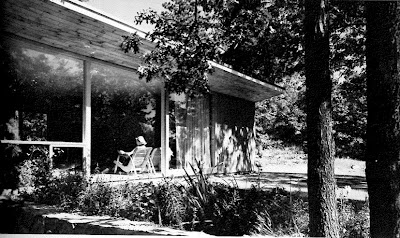 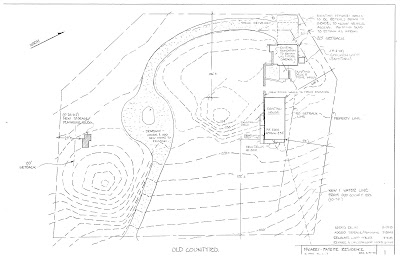 When the Baggs bought it, the property was roughly 12 acres, and a farmhouse formerly sat on the original building site. The farmhouse burned down in the ’40s. The stone garden walls behind the current house were rebuilt on the farmhouse foundations. The route around the site to the garage is actually an old farm road that led from the back of the old farmhouse to a barn that was on Winter St. (the stone foundation of which, remained until the mid-1990’s.) The Baggs’ donated four or five acres of wetlands (off Winter St.) to conservation, and sold the roughly two acres (the lot to the north with the house on the rock) to a landscape architect who lived there until about 2000. That left roughly six acres that they lived on and sold eventually.

There was a “no subdivision” covenant on the property when it was sold, which the current owner believes would have expired in the early 2000s. Mrs. Baggs passed away in the mid-90’s, the covenant was removed soon after and the property was subdivided into three lots by right. The Stubbins/Baggs house sat only a couple of feet from the new property line, and the lot was being marketed as raw land, assuming that the house would be torn down (because of it proximity to the property line, it became illegal as a result of the subdivision).

The current owners moved the house forward about 100 feet on the site, and maintained its original orientation. The move was a little tricky in that the house had to be raised up high enough so that the front entrance landing and the steel supporting it had to pass over the stone wall. The reason it had to go over the stone wall was because it also had to go around(and under) the locust tree. Pulleys were rigged up in the high branches and weights used to lift up the lower branches. The fireplace in the master bedroom was constructed while the house was in the air, and the original fireplace was lowered down onto it.