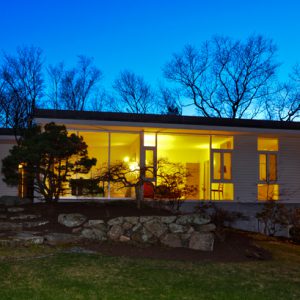 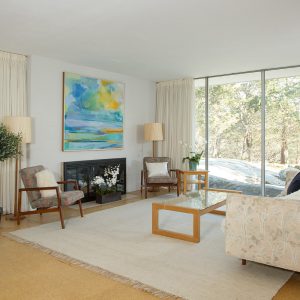 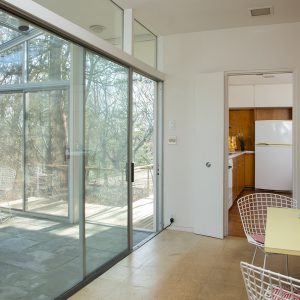 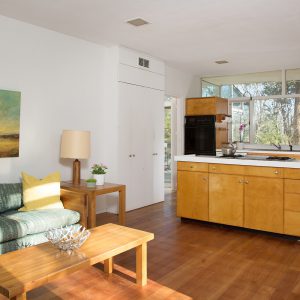 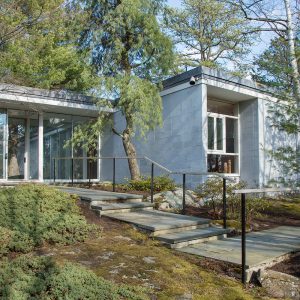 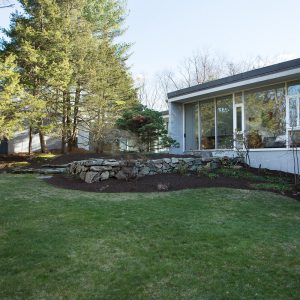 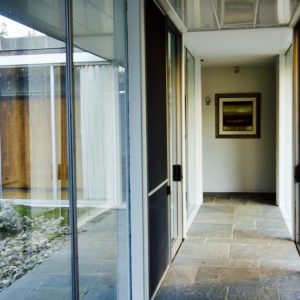 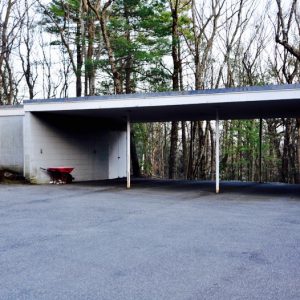 This was the operating principle of Henry B. Hoover, one of the Boston area’s earliest Modernist architects and co-designer — with his partner, Walter Lee Hill — of this remarkable house on a breathtaking site. Just minutes off of Route 128, yet with the feel of a private retreat in the mountains — in the highly sought-after Weston Country Club/Southside neighborhood — this is the first offering of the property from the family for whom it was custom designed and built.

Nestled upon three acres, the all-glass foyer provides the seamless interior/exterior feel that aficionados of Mid-Century-Modern architecture value so highly. In true Hoover fashion, the drama of house begins here, subtly, then unfolds as you enter into the main living area, with brilliant volume, a huge fireplace, and floor-to-ceiling glass walls that feature a glimpse of the Boston skyline through the trees. The living room is open to the dining area. Radiant floor and ceiling heating, fired by natural gas, has been painstakingly updated and the systems are recent. The house is large, very well maintained, and ready for your custom updates. A separate wing has five bedrooms and two full baths. There is a half bath in the other wing, just off the foyer.

Hoover and Hill and The Nelson House Site

In 1934, Henry Hoover climbed a hill overlooking the Cambridge Reservoir in neighboring Lincoln and paid $1000 for two acres on which to build a house for his family. In 1935, he sketched out the house that would be completed in 1937, predating Lincoln’s more famous Gropius House by more than a year. Walter Gropius, who after co-founding the Bauhaus in Dessau, fled Nazi Germany to take the chairmanship of the Department of Architecture at Harvard’s Graduate School of Design in 1936. Gropius’ reputation preceded him, but Hoover had already been working on Modernist ideas before the arrival of the renowned German. Hoover ended up designing over 25 other houses built in Lincoln and close to 100 residences overall, including this 1958 house on Robin Road, “the Nelson House.”

Like Gropius, Hoover was a transplant to New England. Raised in Idaho, he studied at the University of Washington as an undergraduate, and then went on to Harvard for his degree in architecture. After a fellowship that allowed him to travel in Europe, he first went to work for Fletcher Steele, a celebrated landscape architect of the 1920s and 1930s. These two tracks of his training are seen converging in his work, beginning at his own house at 154 Trapelo Road. As described in the book about his work, Breaking Ground: Henry B. Hoover, New England Modern Architect, “Hoover’s practice demonstrates how he utilized, transformed, and individualized prevailing Beaux-Arts architectural training of the 1920s to achieve a modern residential architecture informed by—but different from—the normative (Bauhaus driven) idea of modern architecture.” In the Ecole Beaux-Arts tradition, students take a position, a stance, a decision, called a PARTI’. Hoover’s PARTI’  is that a house is always its site.

This prevailing philosophy is made abundantly clear here at the Nelson House at 75 Robin Road. As with most of his designs, the architect’s design guides visitors through a series of phases of revelation. With 75 Robin Road, you turn off the road, up a private driveway that gently ascends toward the site. You leave the car in the carport and walk up some steps on the front side of the house. Then you enter the aforementioned all-glass foyer and feel both indoors meet the outdoors, as if in perfect harmony. The foyer is referred to as a “glazed-crossbar scheme” in Breaking Ground: Henry B. Hoover, New England Architect. Turning into the living room, the ceiling height increases significantly. The breathtaking vista over the site draws you in and almost back out, onto the rear side of the property, through the wall of windows to the flagstone terrace and rocky terrain beyond, as it gently slopes back down. The skyline of Boston is visible just beyond. Hoover is like a master dramatist, setting the stage for you.

Though Eleanor Nelson recalled in Breaking Ground that “It was very definitely Walter (Hill) who took up the major part of the house, her husband, Arthur Nelson offered a different take in the same book:

In describing their process of selecting an architect for their three acres of land atop a hill from which “we could see the whole city of Boston,” Nelson wrote that he and his wife “drove around all through Weston and Lincoln in other towns looking at houses. The ones we liked were all different from one another, but they were always by the same architect, Henry Hoover. Hoover’s office was in Harvard Square. So I went to see him and asked him if he’d be interested in designing our house. He came out to look at the land and said, “This is a real challenge.” He would sit up there on the rocks and think. It took him a long time before he said, ‘What you really need is two houses — one here and one there. And since nobody can look in your house without getting on your property, you can have a lot of glass to connect the two parts, and to give a sense of living outdoors.’ So that’s how the house got built.”

The authors also quote Hoover discussing the site and how it informed the design:

The quality of the site, the great rock mound, its importance is external, dominating the house, passing nearly uninterrupted through the structure. An average client would have insisted on a driveway curling around the lower end of the mound. But the Nelsons agreed that this long flight of steps up to the entrance was [would] enhance the approach and would enhance the quality of the site…. At the Nelsons I have tried to keep the rock inviolate.

For buyers who are less beholden to the idea of the current approach, there is a dirt driveway that could be paved and used as an alternate approach to the house.

Each of Hoover’s houses was individually designed with the needs of each client in mind, harmonizing problem solving, the needs of the family, and the opportunities of the site. He even custom designed pieces of furniture for the houses, and the Nelson House has some built-ins by Hoover. 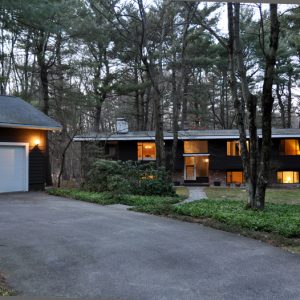 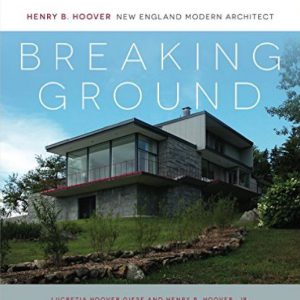