We are thrilled to have the opportunity to market this brilliant house in one of Lexington’s most significant modernist neighborhoods.

Originally designed by The Architects Collaborative (TAC), in the highly desirable mid-century modern community of Five Fields, 26 Barberry Road has been expanded and updated over the years. It is now a four bedroom, three-and-a-half-bath, 3462 square foot house with central air and a two-car garage. A studio with soaring ceiling height and a loft makes the perfect music room, library, artist’s studio, or home office. Alternatively, the floor plan offers the flexibility for this space to be used as a family room, a game room, or to turn the it into another bedroom suite as a master, teen, in-law, or au-pair suite.

There is a large eat-in kitchen, a grand fireplace, and sliders out to the deck overlooking the private fenced-in back yard. The house has three zones of heat and central air conditioning.

Offered at $1,049,000. Showings begin Friday, September 14. There will be a public open house on Sunday, September 16. Use the contact button up top to arrange a private showing.

A boy jumps into the Five Fields swimming pool, from the commemorative book, Five Fields — Five Decades: A Community in Progress 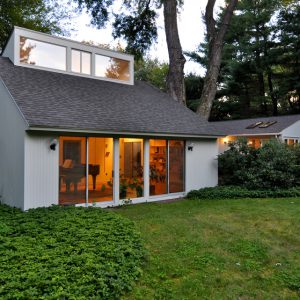