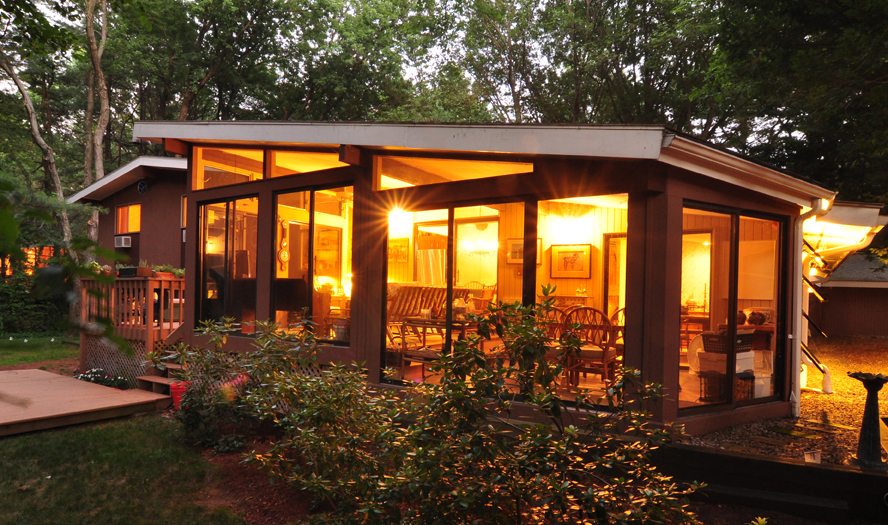 The promise of the undeniable curb appeal is fulfilled in this large, lovingly maintained mid-century modern in Turning Mill, close to the Paint Rock neighborhood pool, with four bedrooms; two and a half baths, including an en suite master bath; central air; and 2592 square feet of living area. An open, expansive, flexible, and flowing floor plan.

The kitchen has been updated with granite and newer stainless steel appliances. Off of the living room and kitchen, there is an addition with a formal step-down dining room and a private den or office. There is a family room (or play room) open to the kitchen, with sliders out to the deck. There is a laundry room and half bath off of the play room. A heated and air conditioned three-season sunroom flows from the kitchen and dining rooms. A two-car garage; and separate workshop room. Enjoy spring from your tiered deck in the private wooded backyard and lushly landscaped yard.

Residents love the area due to its proximity to the highly desirable Estabrook Elementary school (adjacent — many kids walk or bike) and because it offers membership in the country-club-like Paint Rock swimming pool, which is getting some improvements and updates just in time for the 2012 season. It also borders the vast Paint Mine conservation area, with beautiful walking trails. The Lexpress bus runs through. And a quick zip takes you down backroads to Whole Foods, Staples, Super Stop & Shop, Marshall’s, and so on in Bedford, or back the other way into the center of Lexington. And it is not far from Route 128.

Here is the swimming pool from this last summer:

Built in 1962 by Holiday Homes of Wayland, A.K.A. a builder named Eugene C. Roberts, the design of 2 Partridge Road was from the Architectural Planning Associates at 152 Newbury Street, Boston. The principals of that firm were Sandford R. Greenfield and Paul J. Carroll. Later, it seems that they had a firm called Carroll and Greenfield, Architects, before going off on their own. The house is similar in layout to a Peacock Farm house, but is significantly larger, even without the additions. (Please note, the town of Lexington mistakenly has house listed at 4 Partridge, but all mail comes to the mailbox, labeled 2 Partridge. This will hopefully be cleared up January 2013.) 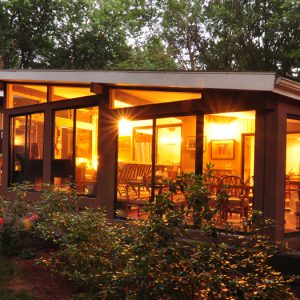