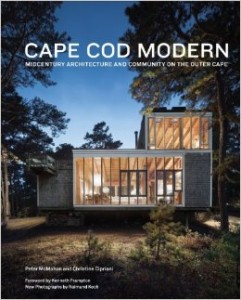 I hate the to be the bearer of bad news, but with the kids heading back to school and Labor Day weekend upon us, the unofficial end of summer is here for those of us in the northern hemisphere. But we each have our ways of savoring those precious remaining days. Mine has been evenings spent with one jaundiced eye on the worst-to-first-and-back-to-worst Red Sox, while salving my baseball-related emotional trauma with the excellent Cape Cod Modern: Midcentury Architecture and Community on the Outer Cape. Written by Peter McMahon and Christine Cipriani, it is a comprehensive history of Modernist designers, architects, and builders in that little wind-swept corner of the world.

Obviously, nobody will mistake the Cape for Palm Springs, or any other vacation destination where modernism had an influence in the mid-20th Century. There are no dramatic Neutra-designed sleek houses with terrazzo floors and swimming pools in the homes covered in the book. No, the history of modernism on the Cape is remarkably harmonious and consistent with more traditional construction of houses, rustic cottages, and public buildings. Indeed, the list of forward-thinking folks profiled in the book were generally experimenting with commonly found materials, even incorporating existing older structures into new designs, and adding their own twists to the architectural vernacular of the region. Such Europeans as Bauhaus originals, Marcel Breuer and Walter Gropius, were smitten with such basic forms as the style we know as the center-entrance “Cape” style house and the utilitarian shelters built in the dunes for fishermen, lobstermen, and shipwreck survivors who washed ashore.

The book offers a broad look at the history of architecture in the Outer Cape, from Native Americans on through today, providing deep context for what these people built — mainly in such towns as Wellfleet and Truro, but with a few other examples highlighted in Dennis, Orleans, and Provincetown. Neatly divided into four parts, the back history, “Four Hundred Years of Building for the Moment,” is followed by “The Brahmin Bohemians;” “Community and Privacy: The Europeans;” and “Late Modernism on Cape Cod.” From the eccentric blue bloods who inherited the scrubby land and improvised with experimental structures, to the incrementally more formal designs of the urbane and genteel Nathaniel Saltonstall, on through to the European artists, writers, and architects who worked on each others’ cottages, it is a fascinating assemblage of people. To be sure, there are some legendary A-list names included here: Saarinen, Breuer, Gropius, Chermayeff, Weidlinger, and so on. But these architects, engineers, and designers shared cocktails and bonfires (and, occasionally, partners) with novelists, fine artists, civil servants, intellectuals, and a New Yorker cartoonist or two (Arthur Schlesinger Jr. sharing a phone line with Serge Chermayeff, e.g.)  And the book shines much light on the lesser-known local craftsmen and builders, some self-taught.

The houses that the first couple of waves of these pioneers of the midcentury built were raw cottages, mostly unheated, built simply, but with particular attention paid to siting, the orientation of the light and water, either perched high on dunes or, more frequently, down wooded roads that opened up to kettle ponds formed by the glacial movements that formed Cape Cod — modernist beach shacks.

The authors also spend the last chapter of the book looking at the influence of these designers on those who came later, including post-modern  architects who bucked what they felt were the constricting tenets of the Bauhaus-descended Internationalists who had in many cases been their teachers. These later “neovernacular modernists” were “explicitly or implicitly critiquing top-down formalism in favor of responsive, user-friendly design.” The thread from the early settlers, through these post-1960s architects is one of an ad hoc quality to what was built in the area.

Raimund Koch’s photos alone make the book a treasure. But here is a well-written history of a small but significant cultural movement, secret to even many of those who grew up on the Outer Cape. To this day, however, the area attracts artists, writers architects, and intellectuals, many of whom have built or live in modernist homes of varying levels of drama and luxury.

There is some explanation of why many of the houses came to be “left derelict” for decades. We get a brief explanation of how the legislation to create the Cape Cod National Seashore, co-sponored by Senators Leverett Saltonstall (yes, related to Nathaniel) and John F. Kennedy, eventually resulted in the Feds buying out owners who had built hundreds of houses, gave them 25-year leases, and many houses were left in “administrative limbo, vacant but still standing, becoming sad shells of a cultural moment that had passed.”  Co-author, architect Peter McMahon, is a heroic figure in these parts for his successful efforts in saving some of these structures as founder of the Cape Cod Modern House Trust. We are given have an epilogue that explains the current state and possible fate of the remaining modern houses located within the Cape Cod National Seashore boundaries. “Seven of them can be described as significant, and of these, five are listed on the National Register of Historic Places. Yet the government has no mandate or budget to protect them. The only route to preservation is for a nonprofit organization to apply to lease the vacant houses from the National Park Service and raise funds to restore and repurpose them.”

The CCMHT has gathered and archived “all available material on the Outer Cape’s modern architecture,” and has successfully leased (long-term) and restored three of these houses, repurposing them “as platforms for creativity, scholarship and public access.“ 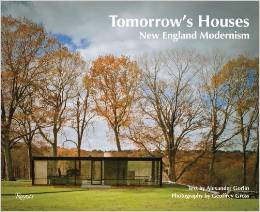 But New England, at least, is not based on any Roman ruins. We have not to lay the foundations of our houses on the ashes of a former civilization.

While Native Americans might have a bone to pick with Emerson, it is indicative of the innovative spirit that still drives the region, in varying levels, from Connecticut to Maine. But there remains the nagging pull of tradition as well, with some form of the generic “Colonial” the most popular style of house being built now.

Tomorrow’s Houses: New England Modernism takes in a much broader scope than does Cape Cod Modern: Midcentury Architecture and Community on the Outer Cape. As Gorlin points out in his introduction, it was during the post-war years where architectural modernism started to gain steam, with the arrival of retiring soldiers to “the bedroom communities around Boston and New York.” So we have not only Levittown, but also New Caanan, Connecticut, and Lexington and Lincoln, Massachusetts, all of which were hotbeds of  mid-century modern home building. Walter Gropius, who had fled Germany during the rise of the Nazis, came to Harvard via London and built his own house in Lincoln. This iconic house is, of course, featured in this book. But the book features houses in Connecticut, Maine,  Massachusetts, and New Hampshire. It includes four of the Wellfleet houses that are also subjects of the Cape Cod book.

Indeed, this points to a weak spot of the book. It aims to take on a five-state region, but ends up concentrating on a few smaller areas and architects. More disappointing is that, after a mention in the introduction, Lexington, Massachusetts, is not represented at all in the photos or spotlighted architects. As any regular reader of this page knows, this ignores not only important privately commissioned houses by such architects as Ira Rakantansky, but entire modernist neighborhoods, developed by the Gropius-led TAC (Six Moon Hill; Five Fields), and Walter Pierce (and partners: Peacock Farm) on spec. How could Ben Thompson’s own Six Moon Hill house not be in the book? Breuer’s own house in Lincoln? Or a house from Eleanor Leonard, a pioneering woman in the field whose initial works pre-dated the arrival of Gropius in the States? It would seem that accessibility to private homes might be the issue. But what we are left with is an almost arbitrary-seeming selection that, with fantastic photos, serves as a lovely coffee table book. But as a tool to understand the impact of a cultural movement in the region, it is a bit lacking. 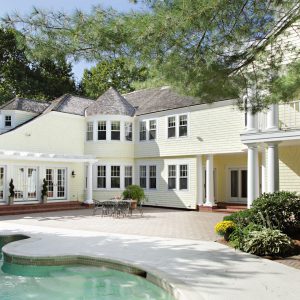 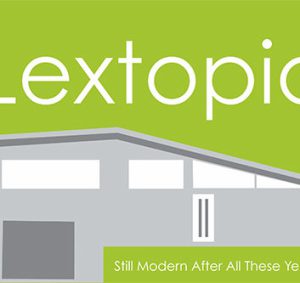 New Events in Lexington and Lincoln