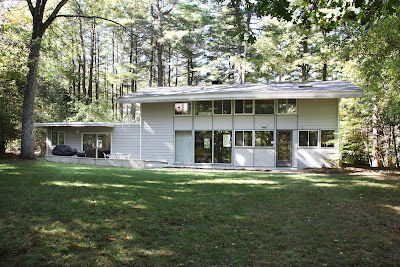 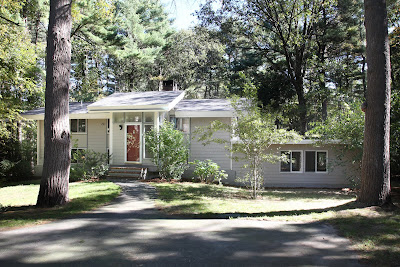 SOLD: Designed by Carl Koch, the “Grandfather of Prefab” (Progressive Architecture, 1994), this Techbuilt classic, a three-bedroom, two-and-a-half bath 2615 s.f. home is a fine example of the pioneering modernism that Koch applied to mid-century homebuilding as returning GIs and a surge in Boston-area technology firms created more demand for housing young families. Bill Janovitz and John Tse are thrilled to offer this property for the listing price of $639,000. It will have an open house 1-3 on Sunday 10/17/20. Please contact me with any questions or to set up a private showing: bjanovitz@hammondre.com.

Set on a wooded 3/4 acre, the siting takes full advantage of the natural beauty of Lexington’s Middle Ridge/Turning Mill neighborhood. Vast expanses of glass open up the living area in the rear to meet the large, level, and private backyard. The open floor plan offers a natural flow. From the foyer (an addition consistent with the modernist aesthetic), one is drawn down the stairs of the split entry toward the views from the windows in the main living area. You will be forgiven for being distracted by the view and failing to immediately notice the newly refinished hardwood floors. The flexible first floor layout consists of a dining area, an airy, open main area, and a cozy nook formed in part by the fireplace and exposed chimney. It is easy for one to picture him or herself curled up with a book, perhaps a rare edition of Koch’s own At Home with Tomorrow. ** 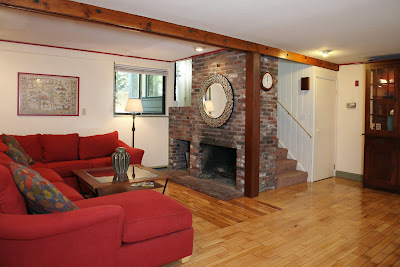 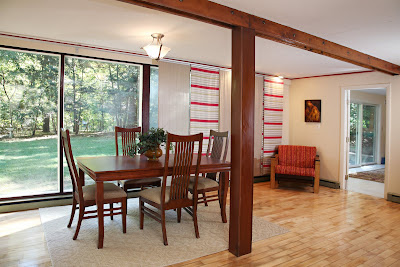 Adjacent to the main living area is a room currently used as a 24X25 family room and spa, also an addition to the original structure. A hot tub is in one corner. One could easily see this room as an office large enough to house a home business, a home gym, a playroom, or as it is currently used. Sliders open up the back wall to a patio. 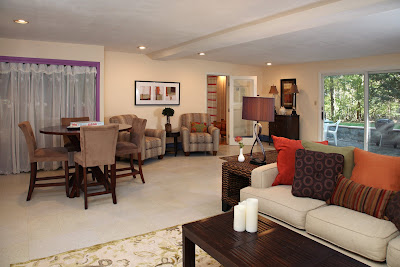 Flanking the living area in the other direction is a huge (20X16) eat-in kitchen with an island. From the walls of windows, watch family, pets, and/or wild turkeys gamboling (as the “wild” variety of turkeys are wont to do) in the backyard while you prepare dinner or wash the dishes at the sink (no need to actually wash, though; of course there is a dishwasher.) 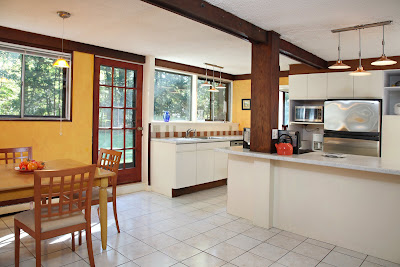 A large half bathroom and laundry room complete the main living area.

Back up through the foyer, a few steps lead you to the main hallway, which in turn opens to three bedrooms and a full bath. A second full bath is included en suite for the master bedroom. All bedrooms feature the cathedral ceilings afforded by the post-and-beam construction. And one of the bedrooms opens up via sliders to use the top of the family room as a deck of sorts. In fact, the seller informs us that the construction of the below structure was designed to support a future deck (as with all such features, a buyer would be responsible for performing his/her own due diligence to verify). 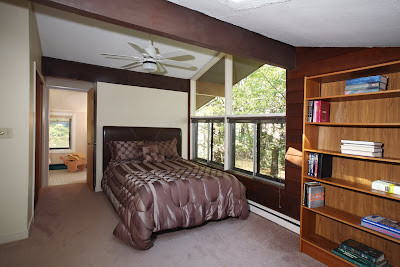 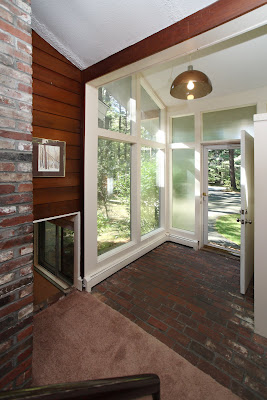 The house had a new roof put on in 2009. There is a two-car garage with plenty of storage. But if you are a pack rat and still can’t find enough room for your “I’ll get to it someday” restoration project of broken Eames chairs, or your collections of moldy Dwell magazines, there is an additional storage shed.

(click any image to enlarge, if your browser allows) 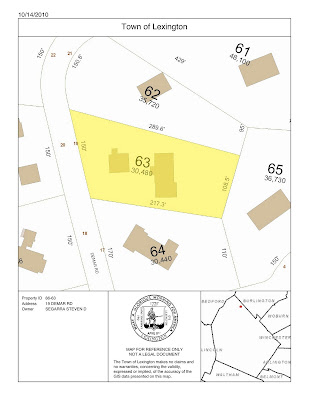 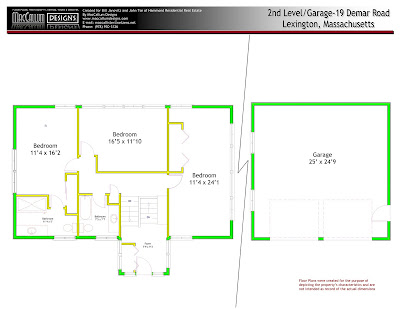 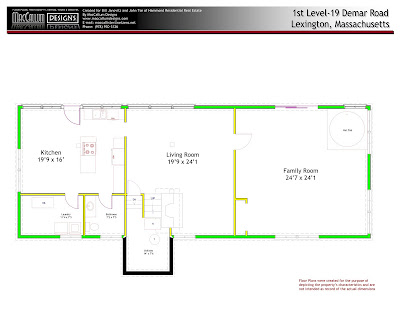 Most people in Lexington know the area as Turning Mill, but it started out being referred to as Middle Ridge. Though it is now a large area of eight or nine streets, it started down here around Demar, with Techbuilt houses designed by Carl Koch, before growing further north and west and incorporating other modern designs, most notably, the Peacock Farm-style house plan designed by Dan Compton and Walter Pierce, who founded Lexington’s Peacock Farm neighborhood on the other side of town. There have also been some Deck Houses built. The expanded part of the area is now referred to as “Upper Turning Mill.”

Residents love the area due to its proximity to Estabrook Elementary school (adjacent) and because it offers membership in the Paint Rock swimming pool. It also borders the vast Paint Mine conservation area, with beautiful walking trails. The Lexpress bus runs through. And a quick zip takes you down backroads to Whole Foods, Staples, Super Stop & Shop, Marshalls, and so on in Bedford, or back the other way into the center of Lexington. And it is not far from Route 128.

Carl Koch, preface to At Home With Tomorrow, 1958

Koch came to the region when he attended Harvard School of Design, during “the confusing period between Beaux-Arts Eclectic and all-out Modern.”*** It was a period (circa 1937) that overlapped with Gropius’ time at the school, but for the most part, it seems Koch regarded his “contemporaries” the school as “leaderless or rudderless.” More significant in the development of his own professional philosophy and style was a six-month tenure he spent in Sweden with Sven Markelius (1940-41), “which left him with an enduring admiration for the Scandinavian approach to life, democracy, and architecture.”*** Certainly one can easily observe the themes of what is typically regarded as the Scandinavian aesthetic — simple, clean, and functional design. 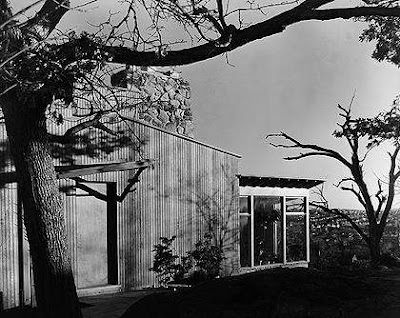 In 1947, he designed the Acorn House (later merged with Deck House). His aim was to create well-designed and stylish housing for a good value (i.e. inexpensively) for middle classes by producing a modular construction system, manufactured in a factory controlled environment, which could be transported to a building site and assembled in a few days. However, the Acorn house was met with “resistance from local governments” and building code problems. **** More on Acorn history, by Lloyd Alter here.

Far more successful were the Techbuilt houses, which, while certainly progressive architecturally, were more in line with prevailing trends and tastes. According to the National Trust for Historic Preservation, over 3000 of these houses were built, utilizing six different models. At least three were built in New Canaan, Ct., that other hotbed of Northeastern modernism, but it seems as though Lexington and Concord have the highest concentration and the highest amount of Techbuilt homes still preserved today.

Exclusive Offering of a 2002 Deck House